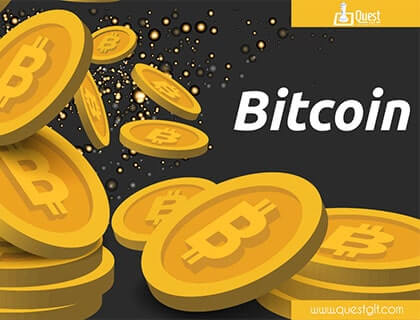 Bitcoins are the virtual currencies which came into public consciousness in 2018. It depicts a

very complex role in the banking regulations or the innovations. First came in 2009 from a

developer named as Satoshi Nakamoto. It was popularly a first crypto coin. There are

thousands of crypto coins normally which are not categorised as bitcoins but as altcoins.

Some examples are Litecoin, Feathercoins, Ethereum etc. There are many advantages of

which is called as hot storage , it has more risk of getting stolen.

and to move the money. Bitcoins can be used online to purchase the goods and service, once

the bitcoins are purchased they seem alike gold coins in pocket. The bitcoin are stored in a

database called as wallet. It has another great advantage of forgery resistance and the

counterfeiters are not able to manipulate it. The value of bitcoin faces the variation daily. The

technology called blockchain technology. The blockchain is called as the data ledger file of

bitcoin. Bitcoin reads the wallet address of each wallet so it need not to record all the names

of people who own the wallet. So, it can be said that bitcoins maintains the anonymity. This

help the deterrence from illegal purposes.

There are many reasons through which a bitcoin is considered as a big deal. Firstly, bitcoins

are not released by any central authority or government. There are no regulations involved in

the bitcoin system. Secondly, it completely bypasses the banks as the bitcoins wallets cannot

be seized or frozen. And lastly the bitcoins transactions are irreversible. Though it has many

pros and cons, but its advantages are attracting many people