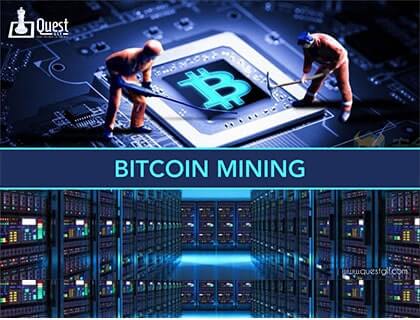 The cryptocurrencies like bitcoin attracted a lot of investors when the cryptocurrencies prices paved way to record level. The price of bitcoin touched the  $20,000 mark in December, 2017. These also impacted other cryptocurrencies, with ethereum selling for more than $1,400 and litecoin reaching above $190 at that time.

Before talking about profit or loss, We need to go through how bitcoin mining works? and how the miners mine the bitcoin and earn the money?

Block works as a public ledger which have record of all past transactions and recording is done by a miner into the ever-growing record of blocks. The series of blocks is known as “block chain”.

In initial time, the block reward was high as 50. But then valued cut into half in 2012. Then the value again cut into half (12.5) in mid-2016. The trend of reducing the reward will take place after every 4th year and continue till 21 million bitcoins are created.

It is only legal way to earn the bitcoin which become more and more difficult to earn.

A Hash is the mathematical problem that  the miner needs to solve through computational power. The Hash Rate is the rate at which these problems are being solved. Higher the Hash Rate, more likely to get find solution of that problems (higher chances of bitcoin created).

The Bitcoin network is specially designed to produce a constant amount of Bitcoins every 10 minutes. Bitcoin’s difficulty implies that what prevent this from happening. Bitcoin difficulty is adjust according to hash rate.

Higher the hash rate, higher the difficulty level of problem to be solved. Basically this means that the more miners that join, the harder it gets to actually mine Bitcoins.

Mining the bitcoin consumes a lot of electricity. You will need to find the electricity rate in that area which entirely decide the electric consumption cost for mining a single bitcoin.

For mining the bitcoin effectively, miners generally join a group of miners that work together. The platform which bring the miners together is known as pool. A sort of fee is deducted from each miners for maintains its operation. On mining of bitcoins successfully, the profit are distributed in members depending upon their contribution.

These above factors mainly decide the miner is in profit or in loss. Changing the price of bitcoin, electricity rate and change in difficulty level of mining directly affect on miner’s profit or even change profit into loss.

Instead of buying costlier mining rig equipment, you can rent some computing power from any company and get paid according to how much power you own. These concept of hiring equipment is known as ‘cloud mining’. It seems to be a good idea as you need not to buy any equipment for mining, cooling and many more. But in reality, it may prove to be costlier in longer run.

Mining the bitcoins at home could be a costlier unless you buy some heavy duty equipment and have very low electricity costs. If you want to make profit by cloud mining, you need to invest a considerable amount of money in a good mining rig.