Learn which cryptocurrency should you invest in ? 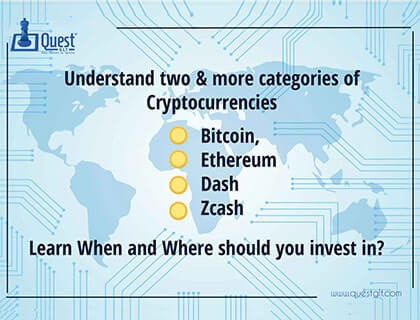 Although the use of crypto-technology is relatively new, yet it is already making a surge in multiple industries. In fact, it has completely changed the aspects of finance and current marketing model.

Despite its considerable quantum of infancy in past years, cryptocurrency has made revolutionary impacts in the Fin-Tech industry significantly with the emergence of over 1,800 cryptocurrencies thus far, yet only a few currencies have worked well in the crypto-market while others have failed badly.

Below is the list of crypto-currencies that have made waves in the Fin-Tech industries with its tremendous rise in values, benefits, security, and exchange rate. As there are many crypto-currencies appeared up to now, these are sub-categorized according to their status in the crypto-market; active, inactive, and proposed crypto-currency.

Understanding almost all cryptocurrencies developed so far would not be easy to list down in an article, so here are some of them typed in with their potential usage and market value.

Bitcoin: Bitcoin is the first real-world experiment of virtual-currency and worldwide payment system that has achieved scale and global recognition. In the financial market system, Bitcoin was released in the year 2009 as an open source software by an unknown person or group of people stated as

It is the first decentralized digital crypto-currency which operates as a peer-to-peer network where transactions take place directly between users through digital units of exchange called as BITCOIN. These transactions recorded in a public distributed ledger called a blockchain. Notably, Bitcoin uses cryptography technology to verify the transactions and appears to offer some unique possibilities to users to be involved with it especially of its highest market capitalization.

Litecoin: Litecoin is a peer-to-peer Internet currency that enables faster transaction and is a better as well as an improved version of Bitcoin that uses Script as a hashing algorithm. Litecoin was released as an open-source client on GitHub in 2011 by Charlie Lee, that uses an open-source cryptographic protocol for creation and transfer of coins. Litecoin improves the scalability constraint involved with Bitcoin by providing large coin supply, reduced mining competitions, and lower transaction fees with a slightly modified GUI.

Namecoin: Namecoin is cryptocurrency that is mined with bitcoin software ( uses the same hash algorithm as Bitcoin) and aims to enhance internet-related security and privacy. Namecoins are traded primarily for USD and other cryptocurrencies mostly on online exchanges. Namecoin provides irreversible transactions so, cannot be used for chargebacks such as those with credit cards or PayPal.

Ethereum: Ethereum is an open-source, public, blockchain-based distributed computing platform and an operating system which allow permissionless innovation and automation via smart contracts. It is a decentralized platform that uses a blockchain to replace any possibility of censorship, fraud or third-party interference with regards to data storage and transfer of mortgages. A key feature of Ethereum is enabling developers to create markets, store registries of debts or promises and move funds without a middleman or counterparty risk.

Zcash: Zcash is a new method implemented with zero-knowledge proof ( zk -SNARKS) that employs cryptography to provide enhanced privacy to its user. In simple words, transactions made by Zcash are both transparent and shielded. Satisfactorily, Zcash payments render an optional privacy feature termed as payment privatization. Though the Zcash-payment process is public, yet desired sender, recipient or amount (transacted) can be privatized. Selective disclosure is a salient feature about Zcash offered to transactors for auditing purposes.

Ripple: Ripple is one of the contenders amongst the array of cryptocurrencies that supports real-time gross settlement system (RTGS), currency exchange and remittance network which accord transactors with secure, instant and nearly free global financial transactions of any size with no chargebacks.

Monero: Monero is a digital cash technology which focuses on the fast, private, and secure transactions. What is new in this technology that makes it stand out of the other virtual currencies is the traceability constraint, where money can be transacted safely, knowing that others cannot see balance or track activity.

Stellar: Stellar is one of the best cryptocurrencies, much better than Ripple and it has a very bright future as it focuses on interoperability between diverse financial systems and currencies which allow decentralized control, flexible trust, low latency, and asymptotic security. Also, the Stellar network can quickly exchange currencies within seconds of processing time.

IO:EOS.IO cryptocurrency is the recent emergence in the Fin-Tech industry and has already made waves all around the financial system with its ultimate features. Forbye, this crypto-technology is a highly scalable blockchain platform that solves the scalability issues by provided hosting, smart contract capability, and decentralized storage enterprise solutions. Also, EOS crypto-exchange envisions thousands-times more transactions than other cryptocurrencies per.

Kodakcoin: KODAKCoinblockchain service is a photographer-oriented blockchain cryptocurrency used for payments for licensing photographs that is to facilitate image licensing for photographers. Statistically, this crypto-exchange is inactive in the finance market as for now.

Coinye: Coinye, formerly Coinye West, is an abandoned script-based cryptocurrency that has been called “defunct” by numerous publication resulting into its inactivity in the finance industry today. Explicitly, the reason behind the descent of this crypto-money was the network’s total processing power that declined roughly by 99% during that time.

Petro Gold: The Petro-Gold formerly as petromoneda, is a cryptocurrency developed by the government of Venezuela and launched in February 2018. Descriptively, the Petro-Gold currency exchange delivers virtual payment including oil trade, taxes, fees, real estate, gasoline, flights and more.

WHEN AND WHERE TO INVEST?

For the trading purpose, Cryptocurrency exchange platforms are such online portals that allow you to exchange a digital currency (cryptocurrency) for another one or even a fiat currency depending upon the type of exchange.

So, if buying and selling of these digital currencies make you think before investing in, down is the list of platforms you can use while exchanging money.