An upsurge in cryptocurrency security? Know How to stay secure while investing money! 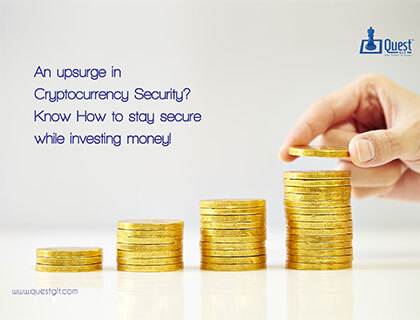 With the rise in crypto-money and formulation of several other cryptocurrencies, security evolves out to be the central concern for the investors from the very beginning of its release. The reason behind the inflation in crypto-market and the currencies was its demand, usability and decentralization system.

As the popularity began to cover most of the financial market, the concern for security affected simultaneously. Decentralization (a system without any third-party governance)paved the way for intruders to obtain digital currencies by practicing illegal means such as phishing, scamming, or hacking.

Comparing to the traditional paper-money or metal counterpart that we hold today, cryptocurrency seems to be more secure than these government protected currencies. However, being in the virtual world leaves it susceptible to malicious entities with each passing transaction.

Hashing is a cryptographic method that converts data into a string of text with the help of hashing algorithm no matter what size it holds. Mathematically, this operations allows easy conversion of a message to hash.

HOW TO STAY SECURE WHILE INVESTING?

Although cryptocurrency is known for its security, thus far with the huge influx of intruders inrushing the market, it has become necessary to stay safe from online investing or storing money in crypto-wallet.

One of the biggest downfall involved in this space is not losing money from trading but losing cryptos.

Let’s jump straight to the passwords and understand what physicalities involved in protecting cryptos from hacking.

Most platforms in exchanges ask for at least one lower or one upper or one number character to personalize your password. By taking password creation seriously, traders can create a strong wall against hackers to counter their money.

What else can they do??

Sometimes it becomes easy for hackers to crack the passwords so, try making a password of heavily 16 digits from the combination of random characters with a capsule space  (question-mark, exclamation-mark, hyphen, dash, underscore etc) that may mean nothing in the definition but can serve a high-security purpose.

2-Factor authentication is the second form of a password (backup password) and a secondary measure of security.

Once you have logged into the usual platform with username and password, you can create the final barrier of entry by 2-factor authentication.

What is 2-factor authentication??

It is simply an automatically generated numeric code for specific platform. Different platforms require distinctive numeric code for entry. Specifically, the code is time-depending, it lasts for few seconds or minutes and then refreshes to a new one.

Private keys are a single most piece of information used to keep it private. Significant to people who own cryptocurrency, they already know how integral this key is. Once it is in the hands of a third party, it is more likely to be hacked.

Usual method people choose to store these, is into the phones or on their computers which eventually increases the risk of getting hacked. It is wiser to store it on a piece of a paper or to keep on secure locations.

For central security, cryptocurrency exhibits three layers, each illustrating the core fundamentals involved in the mechanism of cryptocurrency security.

The First Layer: Coins And Tokens

In the world of cryptocurrencies, security is the first and foremost concern for dealers when investing the money. The risk factor increases to a great extent if the cryptocurrency is related to protocols. No wallet or crypto-exchange method can save the entire network from dissociation.

This layer uses two currencies namely coins and tokens. Coins are an independent network protocol or copies (fork) of some of them.

As an example. Bitcoin is a type of coin that is centralized around four of the largest mining pools.

While tokens are smart contracts sharing features from coin hence the security and reliability depends on the parent cryptocurrency.

Mostly, all the tokens are (ICO coins) Ethereum based only a few rely on smart contracts.

Specifically, Exchanges are custom code with an infrastructural security feature providing centralized web service on a cloud or data center. However, every year we hear about data breaches and security incidents related to exchanges. Some exchanges are already involved in bug bounty program, deceiving people with reliability and security issues.

The Third Layer: Your wallets

Wallets are part of personal security characterized by two of them: the Hot and the Cold wallet.

Hot wallets are more under the control of exchange(Wallet-Provider) which means through custom protocols these accounts are easily accessible.

Despite all these regulations and fundamentals, cryptocurrency still lacks some security measures when it befalls to crypto-exchanges, mining pools, and hot wallets.Regardless of substantial features, cryptocurrency has much to achieve, until  the security issues resolve, all a trader can do is invest in their money wisely on a right platform!