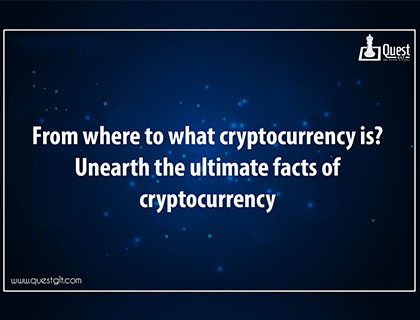 While the world is all upside down with the recent emergence of cryptocurrency, there are still some beginners residing across the bay, completely oblivious about the sudden surge in crypto-currency.Some of them thresh between What is cryptocurrency? How did it upturned digitally? Where did cryptocurrency originate from? What is the history behind its origin in the analogous market? What is its worth? Is it a physical note or a coin? Is it a good investment? How to buy cryptocurrency? Is cryptocurrency legal? Why is it so popular? With all these questions and some more, through this article, you will procure basic knowledge about crypto-currencies and some of its facets hoisting in the market today.

WHERE DID CRYPTOCURRENCY ORIGINATE FROM?- [The History and the origin]

To run the digital economy of the future, people have been trying to develop a system of digital currency for years. The increasing use of checks in the 70’s led to the development of an Electronic Payment Network to replace the ever-growing burden of maintaining papers, records or payments.

Besides this, the 20th century saw a rapid growth in technology resulting in communication revolution, the information revolution and computer revolution but we named it DIGITAL REVOLUTION. Our representation of money used to be cash, paper bills, metal coins, the digital revolution has made money ever increasingly simple and more virtual.

Eventually, after digital revolution, the Crypto-Exchange came out to be the ultimate solution for carrying out transaction digitally. Enumerating to the history, the first decentralized cryptocurrency namely Bitcoin was created in 2009, by pseudonymous developer Satoshi Nakamoto.

Let’s understand the most basic and largely asked question by beginners:

Some say it is the way of future, some say it is just a scam and others call it -magic internet money. Then what is it exactly? Why is it taking the world by storm?

Well! Crypto-Currency is a fad term of which some are paranoid with the idea of its use while some are using it with all their intelligence. If you take away all the hype around cryptocurrencies and reduce it to a simple definition, it is just a medium of exchange, a means of carrying out a transaction digitally. If the term Cryptocurrency is explained explicitly by its name then it defines crypto as means of  “using digital encryption” and currency as “a system of money”.

The currencies involved in this transaction process largely known as Crypto-exchange, exist only digitally, there is no semblance of it in reality.

In the world of fin-Tech today, Cryptocurrency has become a global phenomenon which is known by most of the people and they use them like normal currencies as they would use an online wallet like Paytm. Cryptocurrency is an encrypted, decentralized digital currency used to verify transactions on a distributed system with open source software between peers. The transfer of funds operates on the internet, independently of central banking and governments. Transactions are added to a public ledger – also known as the blockchain via nodes on the network with consensus (agreement) achieved through a proof-of-work system referred to as mining. Cryptocurrencies are a subset of alternative currencies or specifically, digital currencies

3 IMPORTANT FACETS  THAT RELATE TO CRYPTOCURRENCY

In the Fin-Tech industry, virtual currencies that are often termed as the magic internet money are completely independent of government control, any central authority, entity or server. Bitcoin is the first decentralized cryptocurrency, which is an innovative payment network to buy stuff online. These crypto-currencies uses the decentralized network. That means you don’t need any third party server like bank, government, other authorities to perform any type of transaction with the merchants or in easy words, it allows you to send money from one person to another without involving a third party broker, such as a bank. You only need your computer to make transactions. The result of which, existing currency will soon be replaced with ultimate digital currency as it is secure and unregulated by banks.

In the digital system, the virtual money so used by traders is no coin or physical note but a blockchain which is nothing but data in batches. These blockchains use asymmetric encryption (also known as Public Key Cryptography) to secure the data. Asymmetric encryption uses two keys- public and private key to encrypt the data. These two keys make it impossible to crack the network.

The private key is the digital identity which proves the ownership of any particular asset (message, digital currency or anything). While the public key can be accessed by everyone. This prevents the case where an unauthorized user might try to send money from someone’s else wallet.

As mentioned earlier, cryptocurrency uses cryptography. Because of this process, the funds are locked using the public key. Private key owners can send cryptocurrency. Thus, it is impossible to break the schema due to strong cryptographic mechanisms.

Legality of cryptocurrencies has been one of the major points of concern in India. It has kept many investors on a side where people think that investing in cryptocurrencies might put them in trouble or they might even lose their money. There are countries that have legalized and regulate crypto-exchanges (Japan). While, in other countries, it has been banned (China).Though the use of cryptocurrency is neither legal nor illegal and you can hold cryptocurrencies at your own risk.

In the next few years, we may see national governments take large steps towards instituting a cashless society where people transact using centralized digital currencies.