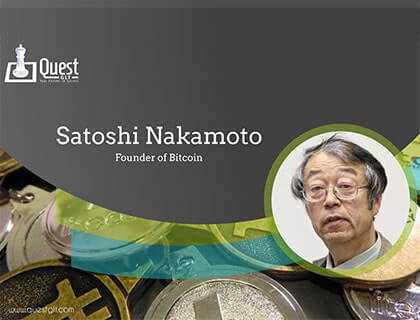 Satoshi Nakamoto is still the debatable founder of Cryptocurrency

When I searched the name Satoshi Nakamoto the very first statement that Wikipedia flashed on my laptop screen was “Satoshi Nakamoto is the name used by the unknown person or persons who developed bitcoin”. This statement clearly gives us the clue that Satoshi Nakamoto is not actually a specific person; it can also be an anonymous gang who developed bitcoin. So it is almost like believing into God and still doubting its existence. People had become so curious to find the inventor of this amazing technique that various experts of Non-Japanese descent, living in the United States and various European countries started digging in to find the face behind this technology.

It was found that he is a man who lives in Japan and was born on 5th April 1975 (claimed). But Nakamoto is doubted on being Japanese by some of its followers due to the use of his perfect English and also the fact that the bitcoin software was not documented or even labelled in Japanese. Some of the phrasal usages in British English state that maybe their team includes a person of commonwealth origin which is still maintaining the curiosity amongst people. This post was one of Satoshi’s final contributions before his disappearance:

“It would have been nice to get this attention in any other context.  WikiLeaks has kicked the hornet’s nest, and the swarm is headed towards us.”

Satoshi Nakamoto was the first one to develop bitcoin whitepaper. They developed the first blockchain database in the network. They were the first ones to solve the double-spending problem for the digital currency. In August 2008, the domain name bitcoin.org was quietly registered and after a time span of 2 months, a paper entitled ‘Bitcoin: A Peer-to-Peer Electronic Cash System’ was passed around a cryptography mailing list. The paper is the first instance of the mysterious figure, Satoshi Nakamoto’s appearance on the web. In 2009, Nakamoto released the first Bitcoin software that created the first bitcoin. On 3 Jan 2009, block numbered 0 was mined by Satoshi and from there the existence of bitcoin network was established.

Nothing but a pseudonym!

Some researchers proposed that the name ‘Satoshi Nakamoto’ was derived from a combination of technical companies consisting of Samsung, Toshiba, Nakayama, and Motorola whose first two letters combine to form this name. However, the existence of people with the same name around the globe increases the confusion.

An alternative to central banking and transactions were introduced which were in force since decades but now have been claimed by the introduction of bitcoin. Inventors of the bitcoin wanted to stay anonymous as it either could cause a disruption or could become a billionaire idea. This fear is natural after peeping into the past wherein 1998 Bernard von NotHaus was sentenced to 6 months of house arrest for dabbling “Liberty dollars” which was a form of currency. Also, In 2007 E-Gold (the first digital currency) was shut down by the government for reasons of money laundering. However, after bitcoin has achieved good success everyone around the world claims to be the actual inventor of bitcoin. The list goes on from Nick Szabo, Wei Dai, and Hal Finney to Dorian Nakamoto, Craig Steven Wright, Shinichi Mochizuki, Ross William Ulbricht and this list goes expanding and will continue till the thirst of this curiosity is quenched.

Based on various researchers and their probability of existence the question of Satoshi Nakamoto still lingers with no exact answer. The turning of the coin on the right side suddenly led to various people claiming themselves as the inventor of this cryptocurrency. However, not any of them confirm to be the actual inventor due to their self-acceptance. Also, this curiosity to find the face behind the invention has killed the cat leading to rumours and fake news. It is better to wait for the next move of this faceless inventor and till then believe this pseudonym of Satoshi Nakamoto and get busy with our own chaos.