Crypto Halving: What is ‘Halving’ ? Use of Halving in the real world 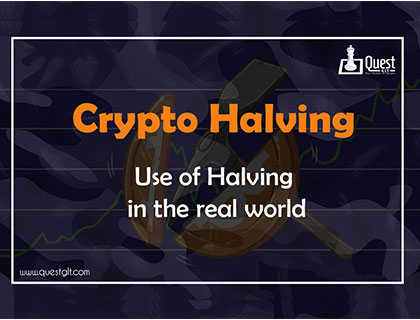 Cryptocurrencies undergo numerous processes to execute a transaction, bearing mining as the ultimate form of money-exchange. Generally, it is perceived to be the most challenging and difficult module to run mining functionalities on cryptocurrency. Furthermore, we see cryptocurrencies experience mining to terminate a digital trade. Moreover, there is another terminology attached with virtual money exchange system that comes along with mining process is formerly known as HALVING.

By literal definition, Halving is derived from an old english word-HALF while by cryptocurrency conventions and theory, halving is referred to as the reduction of mining reward simply by half.

Halving and Mining go hand in hand similarly for a process of halving to befall, mining must ensue at first place.

Henceforth, to discern the process of halving one must be clear of what cryptocurrency mining is and how it takes place?

Also, let’s get a better understanding of what does a reward explains about both crypto-mining & halving and how both these processes are co-related with each other?

Explicitly, both halving and mining are co-related to each other. How? Well, mining is a computer process of verifying and recording set of information on a digital ledger called a blockchain. Also, mining withstands computational process that determines complicated math problems.

Subsequent of which, a new block is created and added to the blocks of a chain called as blockchain, later a reward is proffered to the computer that solved the math problem first.

Hereafter, the process of halving introduces reducing the proffered reward by half.

In detail, as the miner starts digging more and more, the rewards usher to soar high, resulting in more complexities during the process.

At the first mining might be a little easy but eventually, it turns up more complex in its behavior making it more challenging and the time-consuming for miners.

For example, if a Bitcoin bears a reward of 50 units, then implementation of halving will result in a reduction of its value by half that is 25 units. Thus the price gets down to the half value in each stage of mining as the complexities involved with mining functionalities increases, creating an evolution of process called Halving.

Since crypto-investors or crypto-miners are soaring high in numbers with the evolution of cryptocurrencies, there has to be a way out to avoid the scarcity of these virtual currencies. More so, its implementation purely subsists to provide ample of opportunity to possibly everyone and formulate a stronger plus better version of the digital trade system.

USE OF HALVING IN WORLD OF CRYPTO-CURRENCY

Every year or so, cryptocurrencies have been through block reward subsidy halving. Considerate to the most used cryptocurrency namely Bitcoin, it has experienced its first ever halving event on 28th November 2012 where the subsidy reduced from 50 to 25 Bitcoins per block.

With the present-day situation, many traders consider halving as a positive impact on the bitcoin price also, the Bitcoin price has risen quite substantially in the years and days, leading up to the drop in the block reward.

With time and far, it will be fascinating to see how the halving will affect the price, crypto-traders and the miners with its rush in the mining community.