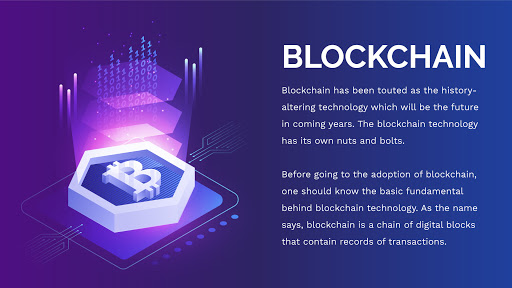 Blockchain has been touted as the history-altering technology which will be the future in coming years. The blockchain technology has its own nuts and bolts.

Before going to the adoption of blockchain, one should know the basic fundamental behind blockchain technology. As the name says, blockchain is a chain of digital blocks that contain records of transactions.

Blockchain is a distributed ledger technology which contains chains of blocks in a peer to peer network which is used for cryptocurrencies. Every block in a blockchain is linked with the previous block which contains information like previous hash, time stamp, transaction data and nonce. It is a revolutionary technology which is powering the cryptocurrencies.

After knowing about blockchain the question arises that

“Is blockchain secure and Why people will rely on such technology?”

So answer to this question is that, yes it is highly secure and we can share valuable data in secure, tamperproof way.

The records made in our blockchain are secured with the help of cryptography. Blockchain platform ensures that your data is encrypted, which means that modification in data is not easy. You can also save a cryptographic signature of a file on a Blockchain and this would give users a way to ensure a file is un-tampered, with no need to save the entire file on the Blockchain. Due to its decentralized nature, if someone tries to change transaction from history they will have to re-mine all the old blocks. Blockchain offers reliable, independent data verification.

At the moment the speed of development is very slow as a result of knowledge gaps and limited skills in the blockchain field. It is said that people were reluctant to embrace change and they often see it as a burden, rather than an advantage. But, in today’s digital era, with research advancements in scalability, decentralisation, and security, blockchain will shift gears in the coming year. Recently a report shows that 84% of respondents claimed their organisations are adopting blockchain.

In spite of all this blockchain has the potential to enhance the quality of service delivery while improving confidentiality and integrity of the data.

Blockchain seems poised to become one of the key pillars of fraud management in the digital world.

The reason why it is the future is because of its decentralized approach, security approach and also because of how the transaction works in terms of being instantaneous.

The initiative to create block chains will not only eliminate intermediaries and reduce the costs and time related to reconciliations, but also offer greater traceability and transparency, increasing efficiency and speed to business processes. It will increase revenue and savings of new business models.

The speed of adoption of blockchain technology has also grabbed the attention of various firms like government and lawmakers across the world.

By using blockchain technology in: -

How Does Blockchain Go Mainstreams?

As an emerging superpower, India needs various solutions to handle major problems including intervention of middlemen, data breaches, corruption, and tampering of ledgers. Blockchain seems to be the most feasible solution.

It is indeed possible for India to be in the leadership ranks of blockchain in the next five years, with the right amount of industry and government participation. The success of adoption of blockchain technology depends on the ability of the proponents /network to increase trust amongst themselves on the assets they transact on.

Blockchain technology is bringing various shift in business model of all sectors all across the world. Many Mainstreams industries like banking, medical, finance, retail etc. tends to adopt blockchain in 2019.

Reserve bank of India is working on application like cashless banking system which will be decentralized.

The population of India is 1.37 billion and India produces 1.5 million engineers per year. Also India holds about 10 percent of its GDP for market share, so if these people work on such technology they will deliver a solid output.

It is also said by our current Prime Minister that Youth of India can lead to revolutionary movement by using blockchain and Artificial Intelligence. All these factors working together will leads to a faster adoption of blockchain technology in India.

We are still in the beginning. But close to a future where we would live a secure and transparent digital world!

So welcome to the world of Blockchain.